I had an awesome time in Singapore earlier in October.

I felt especially welcome at The Hive, Carpenter, where I had the chance to really show off some of the amazing stuff you can achieve with APIs.

At this point, I firmly believe that APIs are seriously powerful (and sometimes undervalued) when it comes to building growth hacking tools.

I’ve personally had immense success with Machine Learning and APIs – just look at the kickass lead generation powerhouse we have in GoPinLeads! 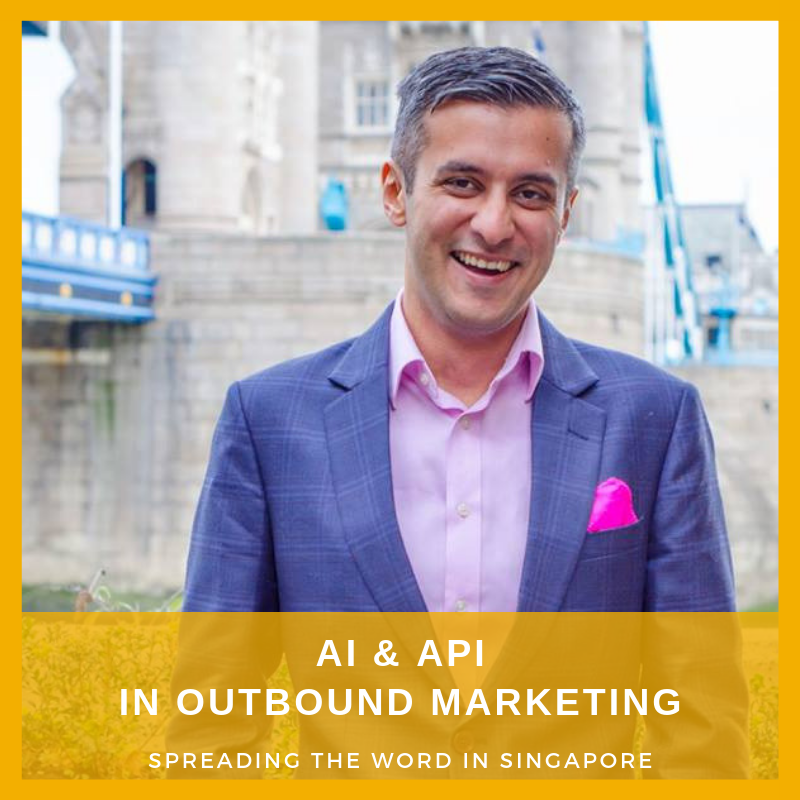 How About a Little Background?

Early in October, I decided to pack up my arsenal of growth hacking tips and take them on tour.

The Hive, Carpenter in Singapore proved to be a fantastic spot for my talk titled “Listen & Learn: Growth Hacking Your Business”.

The talk covered everything from email marketing, to local lead generation, and more.

I’m most excited to share some insights about the section on “AI and API for Outbound Marketing” and the raw power behind them.

A Short Refresher: What Am I On About?

AI is an area of computer science that places a spotlight on the development of intelligent machines that exhibit human-like reactions and behaviours. Computers with AI can be used for functions that include speech recognition, planning, learning, and problem solving.

Machine learning is a core part of AI. Machine learning enables computers to act and make data-driven decisions without supervision instead of being programmed to carry out a specific task. Essentially, machine learning is centered around the development of computer programs that have the ability to access data, using it to “learn” for themselves.

A Bit About API

Simply put, an API (Application Programming Interface) allows one application to talk to another application through straightforward commands. In essence, an API is the “courier” that delivers your request to the provider and then carries the response back to you.

Because of this simplified communication process, a solid API makes the process of developing a program smoother and more efficient. Rather than writing code from scratch, developers are able to build new tools around or extract data from the APIs used by organisations like Facebook, Twitter, Microsoft, Google, and similar bigwigs.

Data enrichment is a value adding process. External data from multiple sources is added to an existing data set, thereby enhancing the quality and richness of the data.

I don’t want you to just take my word for it.

I’ve put together some case studies on how we’ve used AI and Data Enrichment to build some truly amazing tools.

Using the APIs from TheMovieDB.org and Collectorz.com, we helped a company to develop a chatbot that allows customers to enter questions like, “Which British thrillers were released in 2007?” The bot will then provide the customer with several options based on the specified criteria.

Previously, the company outsourced the manual task of searching for these types of questions to a team in the Philippines. Obviously, this approach using Google Search took infinitely longer than necessary when compared with the chatbot we built on Amazon Lex, AWS Lex, and AWS Lambda.

This tool helped the company save inordinate amounts of money as they no longer had to employ humans to answer these questions. Additionally, they were able to boost sales and enjoy a more marked profit.

One of our customers wanted to increase the efficiency of their airport taxi drivers. Often, their drivers would head to the airport to pick up customers but because of flight delays, they would end up waiting around for ages. Naturally, these sometimes hour-long waits made the drivers less efficient.

Better time management would allow drivers to collect other passengers in the meantime, rather than wait around for hours.

We developed a tool for a major hotel chain that would alert staff members to any major events that could affect the hotels and their guests. The tool would need to track all major terror attacks, weather warnings, and airport delays, to name a few.

We built the tool using data from PredictHQ.com, an event API that offers information on the latest events. We also used Amazon Lex and various news APIs to understand the sentiment within these news broadcasts using IBM Watson. We put them all together in one application where we could send our customers an alert through their mobile applications as well as email about potential threats in their local area.

This tool was functional not only in the US but across all 5 continents, in any city, in any region.